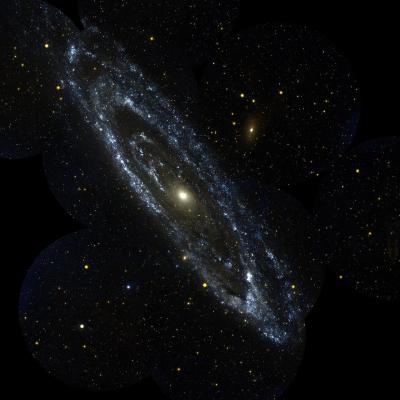 You don’t need a time machine to look into the past.

While you would need a time machine to experience the past, all you need to do to see the past is to look up at the night sky. Because of the distance between objects in our solar system and other areas of space from earth, it takes an amount of time for the light that we see when looking at stars and planets to reach us – so by the time we see it, we are actually looking at a view of the past.

Here on earth, we usually talk about distances in terms of miles or kilometers. Perhaps it’s that you walk 2 miles to and from work, or you drive 250 kilometers to your cottage. Using these measurements makes sense because typically, the distances aren’t very large, so the numbers are easy to understand. While we can still use these numbers for distances in space, the numbers become quite large because of the vast amounts of distance involved. For example, even staying within our own solar system, the sun is 150 million kilometers (93 million miles) away from earth. This means it takes a bit more than 8 minutes for the light emitted by the sun to reach us – so, by the time it arrives, it’s from the past.

Because of the vast distances, we often use the light-year as a unit of measurement instead of miles or kilometers. A light-year is the distance that light travels in one year, which is 9.46 trillion kilometers (or, 5.88 trillion miles). The Andromeda Galaxy, which is the closest galaxy to ours, is 2.5 million light-years away. Considering this, it’s understandable that using miles or kilometers to measure this would be difficult. A view of Andromeda today is actually from 2.5 million years ago, because that is how long the light takes to reach us here on earth.

The farthest known galaxy in the observable universe is called GN-z11. Viewing this galaxy today is actually viewing it as it was 13.4 billion years ago; however, due to the expansion of the universe, the galaxy has “moved’ and is now 32 billion light-years away, so light that is emitted from that galaxy now will take 32 billion years to reach earth.