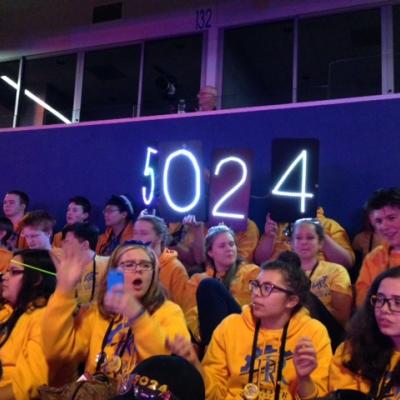 TR Electronic wants to support industrial innovation in every way. That’s why for the past several months, TR Electronic has been proudly supporting London, Ontario, Canada’s H. B. Beal Secondary School’s Robotic Team, through both sponsorship and mentorship, on its quest to compete in the FIRST® Robotics Competition.

FIRST® (For Inspiration and Recognition of Science and Technology) is a not-for-profit organization that designs accessible, innovative programs that motivate young people to pursue education and career opportunities in science, technology, engineering, and math, while building self-confidence, knowledge, and life skills.

The FIRST® Robotics competition combines the excitement of sport with the rigors of science and technology. Under strict rules, limited resources, and time limits, teams of 25 students or more are challenged to raise funds, design a team "brand," hone teamwork skills, and build and program robots to perform prescribed tasks against a field of competitors.  It’s as close to "real-world engineering" as a student can get. Volunteer professional mentors lend their time and talents to guide each team.

Since January, Kevin Condorato and Tristan Pawluch from TR have spent countless hours, many of which were on their own time, mentoring and supporting the students from Beal in their preparation for competition.

During the regional competition in Windsor, Ontario, out of 48 teams, the team from Beal finished 3rd overall.  They also won two awards: The Creativity Award and the Engineering Inspiration Award. That allowed the team to qualify to compete in the FIRST® World Championships in St. Louis, Missouri.

That competition spanned 4 days and consisted of more than 600 teams from 40 countries.  More than 18,000 of the brightest young minds in the world showed off their knowledge in front of 42,000 cheering peers and spectators!

Once again, the Raider Robotics Team from Beal won 1 of 4 Creativity Awards out of those 600 teams – an astounding achievement considering that they were up against teams sponsored and mentored by Boeing, U.S. Air Force, NASA and Google!  The Creativity Award was sponsored by Xerox and Celebrates creativity in design, use of components, or strategy of play.

All of us at TR Electronic are so honored and humbled by these budding engineers! Congratulations, Raiders Robotics!